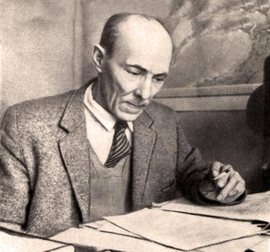 He studied for engineer in Moscow. In 1923, he worked at the geodesic expedition at the North Urals. In 1923-1925, he lived among Ob’ Yugra, learnt Mansi language. Since then, he has been interested in the history and ethnography of the Uralian peoples.

He took part in numerous ethnographic expeditions, studied the culture of Mansi. Since 1927, he studied rock drawings at the banks of the Uralian rivers, as well as at the distant regions. The results were gathered in his fundamental book ‘Rock Images of the Urals’ (vol. 1, 1964; vol. 2, 1970).

Candidate Thesis: ‘The main stages of the history of Priobye from the most ancient times till the tenth century’ (1942); Doctor Thesis: ‘Rock images of the Urals’ (1970).