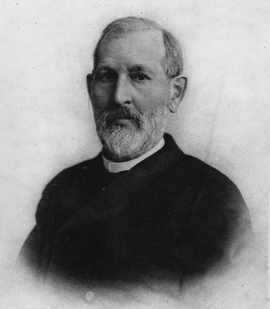 Buslaev Fedor (1818–1897) – philologist, linguist, folklorist, specialist in folk religion and Slavic mythology, historian of culture; Correspondent Member of the Imperial Ac. of Sc. since 1852, Academician since 1860; lecturer of the Moscow University.

After the Penza Gymnasium, where among his teachers was V. G. Belinsky, he enrolled to the Moscow University and received state financial support. The most influential professors for hum were historians M. P. Pogodin, S. P. Shevyrev, I. I. Davydov. But the main figure for B. was founder of the mythological school in folkloristic J. Grimm; B. also was under the strong influence of linguistic works by W. von Humboldt and research by founder of comparative linguistic F. Bopp. Later B. was interested in works by E. Renan.

In 1848, he defended his Master thesis in Russian Literature ‘On the influence of Christianity at Slavic language: An experience in the history of language on the base of Ostromir Gospel’. After it, he got a position of lecturer at the Moscow University. He got Doctor degree for his book ‘Historical Essays on Russian Folk Literature and Art’ (1861) without defense.

He did much for studying Russian culture, observing it as a whole entity; he studied folklore, written sources, manuscript illumination, and icon painting. Thanks to his works, some public interest in Old Russian icons was shaped, and works by B. in the field of Old Russian iconography are still actual. He had serious influence at the Russian mythological school and, in general, at the development of the mythological theory; it was also important that he used comparative approach in history. His works were connected with the national research tradition shaped by such scholars as A. N. Afanasiev, A. N. Veselovsky, A. A. Potebnya, A. A. Kotliarevskey et al.