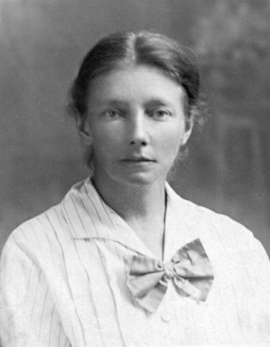 Briullova-Shaskolskaya Nadezhda (1889–1937) – She was born in a gentry family of the Briullovs; a granddaughter of architect and painter A. P. Briullov. She got secondary education at the Vasileostrovskaya Female Gymnasium in St. Petersburg and enrolled at the Historical and Philological Faculty of the High Female Courses. After successful graduation, she was invited by Proff. Zelinsky and Rostovtsev at the Chair of Classic History and Philology and was sent for an educational trip to Germany and Italy. She studied at the Universities of Wien and Heidelberg, at the Archeological Institute of Rome. She wrote her Master thesis in German on the topic of Roman Animism: ‘Der Romische Animismus’ but because of the start of WWI the research has not been published.

From 1907 till 1913, B. published her main works in the history of religion which made a significant input into studying classic antiquity: ‘On Roman Animism’, ‘On Religious Alphabets’, ‘On the Dating of the Apocalypses’, ‘On Roman Votives’ (in the collection of article in honour of N. I. Kareev), and she edited all articles on Roman religion in the Brokhaus and Ephron Lexicon (among large articles: ‘Magic’, ‘Emperor’s Cult’, ‘Vesta’, ‘Genius’, ‘Lares’, and ‘Votives’). At the same period B. translated Sextus Empiricus; her introduction to the book demonstrated not only her abilities as translator but also her vast knowledge in the field of classic philosophy.

On the base of comparative approach to studying mythology and religion, B. made thorough analysis of religion of Ancient Rome, including such aspects as religious alphabets, votive images, and a less known cult of Argei.

Since 1914, she has worked in Petrograd – mostly in the sphere of social and educational activity (gymnasium, workers evening school, workers museum excursion, People University and other systems of education) and wrote for magazines. After the death of her husband, from 1919 till 1921, B. worked in the Ukraine – also in the educational system, in trade unions and S.R. political party structures. Thanks to the initiative of E. G. Kagarov, she was invited wo the Kharkov University, became Prof. at the Chair of History of Religion.

In 1921, she returned to Petrograd to the Museum of Anthropology and Ethnography, where he worked as Researcher and then as Research Curator, Head of the Department of Africa – there she studied a comparative history of primordial African cults. She also made lectures in comparative mythology at the Geographical institute, and became Prof. of the Hebrew University, at the Chair of Comparative History of Religion. She worked in collaboration with L. Ya. Sternberg, who took her for talented and decent scholar in the field of history of religion.

She was arrested for the first time in 1922 and sent to exile to Tashkent with the following lost of civic rights. At that period she taught at the Chait of Ethnography of the Oriental University. After her transfer to Poltoratsk (Ashgabat), she kept working as researcher; then ut was prohibited for her to live in the biggest cities of the U.S.S.R. for the next ten years, and she stayed in Turkmenistan. There she worked as ethnographer. In 1926, B. organized an ethnographic expedition. In Tashkent she actively participated in the activity of the Main Middle Asian Museum.

In 1933, she was arrested again, her exile to Tashkent was prolonged, and it was prohibited to her to make any work as historian. The last arrest took place in 1937, she was sentenced to death and shot on October 9, 1037; rehabilitated in 1950-s.