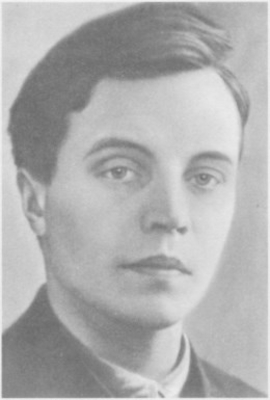 Borisov Andrey (1903–1942) – specialist in Semitic and Iranian studies, worked also in the field of Arabic studies.

In 1924, he enrolled at the Oriental Department of the Leningrad State University and studied Semitic languages and literatures. His main supervisors were P. C. Kokovtsov (Semitic studies) and I. Yu. Krachkovsky (Arabic studies). He had special interests to Jebrew-Arabic philosophical texts and Aramaic epigraphy. In 1926, he traveled to Middle Asia, visited Tashkent, Bokhara, and Samarcand. In 1928, he gor his diploma and worked at the Asian Museum (Institute of Oriental Studies of the Ac. of Sc. of the U.S.S.R.) for nine months. In 1930, he entered the Hebrew Department of the State Public Library as Ass. Librarian. He worked there till 1933 and had to give up because of a conflict with Hebraist J. J. Ravrebe. In the same year, he signed to the post-graduate courses at the State Hermitage, at the Department of Culture and Art of Ancient Iran; he studied there till 1938. His main specialization was literature of Pahlavi. At the same time, he was invited to make courses of Arabic and Ancient Hebrew at the Chair of Semitic Languages and Literatures of the Leningrad Institute of History, Philology and Linguistic (since 1936 – Philological Faculty of the Leningrad State University). In 1937, he got Candidate degree in Philology without defending thesis. He still worked at the Hermitage and became Senior Researcher there. In 1939, he started his Doctor thesis ‘Problems of the so called Aristotle’s Theology’. Research works by B. were dedicated to philosophical and historical compositions by Karaite and Hebrew and Arabic writers, description of Mu’tazilite and Samaritan manuscripts, studying monuments of Aramaic and Iranian epigraphy and objects of material culture, Arabic and Iranian studies. In 1941, B. went to Samarkand and then Tashkent for a business trip, and was there when the war began. He returned to Leningrad, assisted in packing the Hermitage collections for evacuation. During the autumn amd winter of 1941-1942, he worked at his thesis. Before the evacuation of the university in the end of 1942, he transferred to the Institute of Oriental Studies of the Ac. of Sc. of the U.S.S.R. He died suddenly at the days of evacuation of that institute.