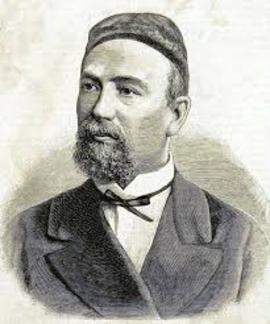 From 1834 till 1837, he studied Arabic and Persian languages at the Kazan' University, under the supervision of Prof. F. Erdman and Prof. A. K. Kazem-bek. In 1837, Berezin graduated from the Historical and Philological Faculty. In 1842, he got his Master degree in Oriental literature and languages; in the same year, together with F. Dittel (1816-1848) he was sent to the East to improve his knowledge. For the three years he has visited Persia, Mesopotamia, Syria, Palestine, and Egypt. Almost a year he lived in Constantinople, learning Turkish language. In 1846, he got a position of Ass. Professor at the Chair of Turkish at the Kazan’ University. In the late 1846 – early 1847, he was sent to Moscow to work in the archives of the Ministry of Foreign Affairs, to observe its oriental collections. In 1855, he was invited to the Faculty of Oriental languages of the St. Petersburg University, as Full Prof. of the Chair of Turkish and Tartar Literature and language. Since 1850-s, he has worked for such magazines, as ‘Moskvityanin’, ‘Russkyi vestnik’, ‘Biblioteka dliya chteniya’, ‘Otechestvennye zapiski’, and ‘Sovremennik’. He wrote essays on his travels of 1842-1845 and on various issues connected with Islam. In 1865, he defended his Doctor thesis ‘An essay on the inner structure of the Ulus of Juchi’. In 1870-1879, he published 16 volumes of ‘Russian Encyclopedic Lexicon’. In 1883-1884, he published two volumes (from supposed eight) of ‘New Encyclopedic Lexicon’.