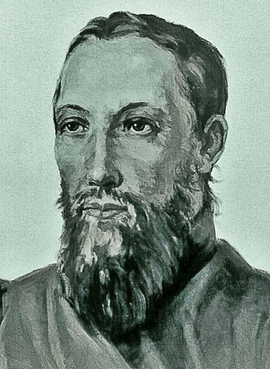 Hyacinth (Bichurin Nikita Yakovlevich) (1777–1853) – the founder of Sinology in Russia.

He was born in the village of Akuliovo in the family of a priest; in 1787–1799, he studied at the Kazan’ Seminary, and at the Kazan’ Spiritual Academy; in 1800, he became monk, and in 1802 – Archimandrite of the Ascention Monastery in Irkutsk, Rector of the Irkutsk Spiritual Academy, member of the Consistory. In 1806, he lost his positions and was sent to exile to Tobolsk, where he shaped his interest to studying peoples of China and Siberia. In 1807-1821, he lived in Bejing, where re served the Head of the Russian Ecclesiastic Mission. In some year, he learnt and perfected his Chinese, then he learnt Manchu and Mongolian languages, and after it started his work on translation of short Catechism, a description of the Orthodox doctrine and a short version of the Holy History into Chinese. He also started his systematic studies in the history of the peoples of Central and Middle Asia, translation Chinese texts into Russian – including those about religious matters. In 1823, he was deprived of the rank of Archimandrite and sent to the Valaam Monastery; in 1826, he was transferred to the St Aleksander Nevsky Lavra in St. Petersburg, where he was signed to the Asian Department of the Ministry of Foreign Affairs. He took part in several expeditions to Siberia (1830, 1835). In 1828, he was elected for Correspondent Member of the Russian Ac. of Sc., in 1831 – member of the Asian Society in Paris.

His deep studies in the history and contemporary life of China made H. one of the first Orientalists, who found an inner connection between Chinese philosophy and religion, he translated a codex of Confucian texts ‘Four Books’ (Si Shu) into Russian, wrote about Confucianism: ‘A Description of the Religion of Scholars’ (publ. in 1906), and ‘The Main Rules of Chinese History, Initially Established by Confucius and Accepted by Chinese Scholars’ (1839), published his books ‘China, Its Inhabitants, Moors, Habits, Enlightenment’ (1840), and ‘China in Its Civic and Moral State’ (1848).