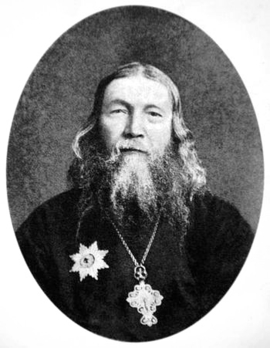 Antonine (Kapustin Andrey Ivanovich) (1817–1894) – specialist in Byzantine studies, in ecclesiastic history, in Palestine studies, archeologist and collector, who made a big input into the Russian tradition of studying Near East, Minor Asia, and Greece.

In 1843, he got his Master degree in Theology at the Kievan Spiritual Academy; in 1845, being Bachelor, he got monk’s rank and kept his teaching and research work at the Academy. Since 1850, he was rector of the church at the Russian Embassy in Athens. In the course of works on the restoration of the church, he – for the first time – headed archeological excavations; then he got the rank of archimandrite and at the same time made his first publication ‘On the Ancient Christian Inscriptions in Athens’. He travelled to the Athos and studied old manuscripts and printed books there. In 1860-1865, he was rector of the church at the Russian Embassy in Constantinople; in 1865, he was transferred to Jerusalem, where – from1869 and till his death, he was head of the Russian Ecclesiastic Mission. He made a description of manuscripts of the library of the Jerusalem Holy Sepulchre Representative Office in Constantinople, and the Patriarch Library in Jerusalem, manuscripts and old printed books of the St Sabbas Lavra (Mar Saba), St Catherine’s Monastery on Sinai, studied the Sinaic Codex, and participated in the negotiations on its transfer to the Russian Empire, managed archeological excavations in the old City of Jerusalem – where the remnants of the so called ‘Judgement Gayes’ and the basilica of Emperor Constantine (4th cent.) were found. He founded a museum at the Russian Ecclesiastic Mission and gave it his private collection of manuscripts, books, and coins.