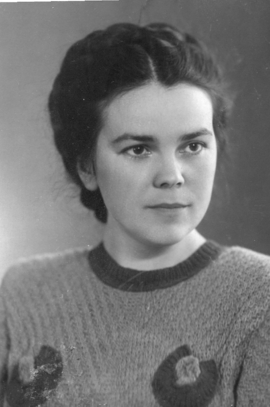 She finished secondary school in Leningrad on June 22, 1941. Up to the May 1942, she stayed in Leningrad, in the blockade, and worked as pioneer leader with children, then, as a sanitarian in hospital. From May 1942 till April 1945, she was in the army, at the front. Among her awards was a medal ‘For Military Deeds’. From September 1945, she became a student of the Historical Faculty of the Leningrad State University; she graduated it with excellent results in 1950. She studied under the supervision of Prof. S.N. Valk.

From the student period, she conducted archive studies on peasants movements in Russia and found new documents, including secret reports of bishops to the Synod about the anti-clerical riots in the first quarter of the twentieth century. That archive experience helped her to organize the work of the Manuscript Department of the Museum (Research Historical archive of the Museum) created on the initiative of V.D. Bonch-Bruevich in 1951; that department got a great massive of manuscripts which still form the main corpus of the archive collection of the Museum.

The main topic of her research was in the field of the history of Orthodoxy and Russian peasants movements; she wrote also numerous popular works on the history of Christian rituals and festivals.

She was the wife of Soviet philosopher and historian of religion M.I. Shakhnovich.