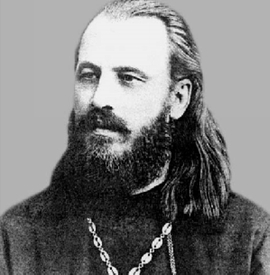 After the Moscow Spiritual Academy he became priest; in 1882, transferred to the city of Kharkov. In 1884, for his composition ‘The Life of Our Lord Jesus Christ’ he got his master degree in Theology. In that work he criticized rationalistic interpretations of New Testament, first of all – that one of the Tubingen School of Protestant theology, represented by E. Renan.

Since 1893, he has been Archpriest of the Cathedral in Kharkov, Prof. in Theology at the Imperial Kharkov University (1894); since 1906 – member of the State Council; member of Monarchists ‘Black Hundred’ organizations (‘chernaya sotnya’). He was an active supporter of the idea of ‘blood libel’ and made public lectures on the topic. In the connection of the ‘Beilis Affair’, he published his report ‘On the Essence and Meaning of Bloody Sacrifices in the Pre-Christian World, and on the So Called Ritual Murders’ (Kharkov, 1914).

In his articles in church magazines he criticized contemporary rationalistic philosophy, as well as ideas of Russian religious philosophers, including L. N. Tolstoy; B. published several accusatory texts against Catholicism and Protestantism, Russian sectarianism, and against Old Believers.