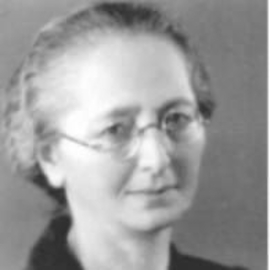 She was from a family of a railroad worker; in 1918, she finished the Eights Tbilisi Female Gymnasium. In 1925, he graduated from the Philosophical Faculty of the Tbilisi State University. In 1925-1928, she was laboratory assistant, then Senior Researcher of the Department of Ethnography, the State Museum of Georgia. In 1928-1932, she studied at the post-graduate courses of the State Academy on the History of Material Culture in Leningrad, in the field of the Caucasus studies, under the supervision of N. Ya. Marr, I. I. Meshchaninov, and A. A. Miller; at the same time, she took part in the work of the Section of Studying Beliefs of the Peoples of the U.S.S.R. at the State Museum of the History of Religion. Having returned to Georgia (1932), she made research in ethnography and became organizer of academic activity: since 1934, she has been the Head of the Cabinet of Ethnography at the Historical and Archeological Institute of the Caucasus Studies of the Ac. of Sc. of the U.S.S.R., managed the post-graduate courses at the Institute of the Caucasus Studies.

In 1934, B. got the degree of Candidate in History without the defense of thesis; in 1935, he became Docent. Since 1936, she worked at the Institute of Language, History and Material Culture of the Georgian Branch of the Ac. of Sc. of the U.S.S.R.; since 1939, she has made lectures at the Historical Faculty of the Tbilisi State University. Since 1958, she has got the Doctor degree in History (the thesis defense in 1957); since 1966, she has been Professor. She headed the Department of Ethnography of the Institute of History, Archeology and Ethnography named after J. Djavakhishvili. She was the Honoured Researcher of Georgia (1963), had the Lenin’s Order.

The approach of B. to research in the field of ethnography was mainly shaped in Leningrad – at the State Academy on the History of Material Culture, and at the State Museum of the History of Religion; particularly, she was influenced by N. M. Matorin. Her main input into studying the religious history was in the sphere of astral cults and the cult of Sun goddess (Barbar-Barbar) and connected rites reflecting the fight of that goddess against dark forces (Nishkha-Nishkha). A cycle of works was dedicated to the reconstruction of rites , particularly, those of ox as a symbol of death of Gmerti – the highest god of ancient Georgian pantheon and the ruler of heavens. Her works allowed to include ancient Georgian mythology and rites into a broader context of Western Asia and the Mediterranean Region.