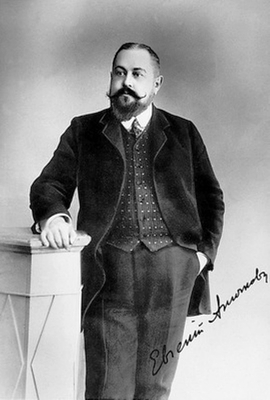 Anichkov Eugeny (1866–1937) – folklorist, specialist in literature and Slavic mythology, Christial legends, popular religion; he also studied religious ideas in the Russian culture of the second half of the nineteenth century.

Disciple of A. N. Veselovsky, he graduated from the Romanic and Germanic Department at the Historical and Philological Faculty of the St. Petersburg University. Since 1895, he has been Ass. Docent at the Chair of the History of Western Literatures of the St. Petersburg University. He actively participated in the research activity abroad: he was one of organizers of the School of High Studies in Paris, made lectures on comparative mythology and folklore in Oxford.

His thesis ‘Spring ritual song in the West and among Slavs’ (1904) was awarded with the Uvarov Prize of the Ac. of Sc. In 1914, he went to the military service, he served as military censor. In 1917, he was sent to France with a regiment, and served in the French Army. Since 1918, he has lived in Yugoslavia, he taught at the universities of Belgrad and Skopje.

In his political views A. was close to ‘Narodniki’ and treated himself as Social-Democrat (‘Men’shevik’). In 1887, he was brought to the case of A. I. Ulianov – they were acquainted; in December he was arrested and fired out of the university because of his participation in students riots; he was sent to the military service in the Ukraine; in 1889, he was restored at the university. In 1900-s, A. was numerously arrested. In the end of 1902, he was arrested at the ‘Peasants Union’ case and spent thirteen month in the solitary confinement (he was freed according the Highest Manifesto). A was also Mason and took part in organizing of Masonic lodges in Russia (1906, ‘Revival’ Lodge) and in Yugoslavia (‘Maksim Kovalevsky’ Lodge).