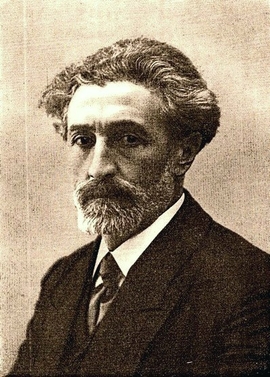 He studied in cheder. In the age of sixteen he was inspired with ideas of such cultural and social movement as Chaskal (enlightenment), shaped in the eighteenth century; its participants believed that Jews should escape their cultural and religious separation through laic education. In 1892, he had to emigrate.

He worked as a secretary of one of ideologists of the ‘Narodniki’ revolutionary movement Petr Lavrov. In the emigration A. took part in shaping the Agrarian Socialist Leagye later included into the Socialist Revolutionary Party (S.R.). Having returned to the Russian Empire in the course of the 1905 Revolution, he organized ethnographic expeditions studying the traditional culture of East European Jews, their folklore and legends – with the support of the Hebrew Historical and Ethnographic Society (created in 1908). A. did not stop his ethnographic research even in the time of the WWI, visiting the war zone with humanitarian missions. After the February Revolurion of 1917, he was elected to the Petrograd City Duma from the S.R. Party. He left Russia in 1918.