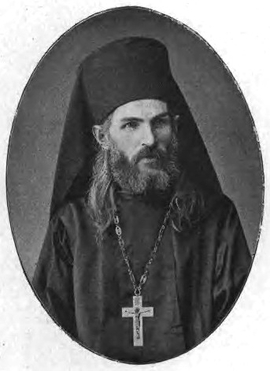 Alexius Hieromonk (Vinogradov Aleksander) (1845–1919?) – Vinogradov was born in the family of a priest; graduated from the St. Petersburg Spiritual Seminary (1859-1865); worked there as an ‘assistant of the iconography supervisor’ (1865-1867); left his studies at the St. Petersburg Spiritual Academy on the first year because of financial reasons. From 1868 till 1874, taught iconography at the Yaroslavl Spiritual Seminary; in 1870 failed in his attempt to enter the Moscow Spiritual Academy. At the end, he has not received a systematic theological education. In 1871, Vinogradov – not breaking his course in the seminary – entered the Demidov’s Legal Lyceum in Yaroslavl; he graduated it in 1874 with the degree of Candidate in Law. Up to 1879, Vinogradov served as auditor of the St. Petersburg Military Regional Court, from which he was laid off – formally, in the process of its reorganization, but in fact because of his negligence in service. In 1878-1881, he studied at the Archeological Institute in St. Petersburg, and at the same time he was an assistant of its Director N. V. Kalachov. That time, Vinogradov studied Russian history, ethnography of the Tver’ Region, ecclesiastic archeology and art; he made reports in various Petersburg scholarly societies, published a number of articles.

On April 24, 1881, Vinogradov succeeded to become a participant of the Bejing Spiritual Mission; on May 10 he took a veil of monks and the name Alexius; on May 24, 1881, he was ordained. The next seven years (1881-1888), spent in the East, were dedicated to studying Chinese language and literature. His work in the Spiritual Mission provided A. several Church awards; on April 5, 1884, the Synod ordered him ‘the second to the Head of the Mission’. In 1888, A. was sent to the Kievan Pechery Lavra, but he succeeded to be transferred to St. Petersburg, to the representative residence of the Kievan Lavra, where he lived till 1895. At his own account, he published in Petersburg several books: ‘The History of English-American Bible’, the first volume of ‘The History of the Bible in the East’, an essay ‘Old Patriarchal Dynasties’. In 1893, for ‘The History of the Bible in the East’ and ‘Old Patriarchal Dynasties’, on the offer of Ober-Procurator of the Synod K. P. Pobedonostsev, he was awarded with a gratitude from the Emperor and with a breast cross. In 1895, A. returned to Bejing, but two years after he had a conflict with a new head of the mission. As a result, A. was called back to Russia; he was sent to Optina Pustyn’, where he has lived at the retirement for almost twenty years. In 1904, after numerous refusals in vacations in St. Petersburg from the hermitage leaders (A. planned to perform his paintings at the Academy of Fine Arts, and to pass an exam at the research degree in Petersburg), he send a request to the Synod for leaving the monastic state and

returning to the laic community with keeping pension and the rights got through his education and service; since then, he signed all his works ‘Aleksander Nikolaevich Vinogradov, former Hieromonk Alexius’. The Synod refused him in the request and ordered to pass him under the surveillance of local bishop. A. failed also in his attempts to find a position of lecturer in academy or seminary, as well as in demanding a permission to pass the exam at the research degree. The end of his life was tragic: alone, deemed insane, isolated from any contacts out of the hermitage (where they regularly mocked at him), under the humiliating surveillance of monastic administration, Hieromonk A. starved to death in 1919.

Published works by Vinogradov could be divided into two parts: articles and notes on various small archeographic issues, and on ecclesiastic local history. In the Manuscript Department of the Russian State Library there are also his vast essays and translations on Chinese language and Sinology, Roman Law; the following works could be added to the same block: ‘Collection of materials on Biblical criticism’ (Col. 52, part 12, file 1) and a directory to it (Col. 52, part 8, file 2) – more than 650 sheets of notes, mainly there are complete translations of articles from the Biblical encyclopedia by McClintock and Strong on the history of Hebrews and Judaism, perhaps, for the introduction to his study of the history of Jews in China (Col. 52, part 14, file 1) and miscellaneous materials and versions of the second and third volumes of ‘The History of the Bible at the East’ (Col. 52, part 6, file 1; part 7, file 1; part 8, file 1; part 9, file 1; part 10, files 1-8).